There is endemic exploitation of low paid migrant women workers in some sectors of the economy. According to our experience at the Latin American Women’s Rights Service (LAWRS) this could vary from cases such as Maria who works in hospitality and is supposedly  “paid the national minimum wage per hour” but in reality is paid by the number of rooms she cleans. It being virtually impossible for an average person to clean her target number of rooms in one hour, in reality Maria gets paid well below the national minimum wage.

Amparo sometimes gets paid for extra hours cleaning offices in a posh building in the City but sometimes she doesn’t. However, it took her a long time to work this out.  Beatriz gets paid the London Living Wage in one of her cleaning contracts with an agency, while at the same time being forced to work for payment below the National Minimum Wage on another of her contracts with the same agency. If she refuses, she will lose both contracts.

Laura never gets paid for extra hours and Antonia forces herself to go to work even when she is very ill to ensure that she is paid and not to lose the hours that have been allocated to her.

There are many common experiences for Maria, Amparo, Beatriz, Laura and Antonia and many migrant women workers like them. They all work in low skilled, low paid jobs in cleaning and hospitality. They work though outsourced agencies doing several shifts per week for different contracts and working unsocial hours (from 4 am to 8 am and from 6 pm to midnight) finishing when mainstream workers start and starting when they go home. Some of them don’t know who their employer is (as there is a chain of contractors and sub contractors) and only know their immediate line manager who also speaks Spanish.  Another common trend is that they all live in “in work” poverty and struggle to make ends meet; and they feel they can’t complain because they simply can’t afford to lose their jobs and not be able to feed their children. Colleagues who have complained in the past have been dismissed or simply have not had additional hours of work allocated to them.

Maria, Amparo, Beatriz, Laura and Antonia are migrant women workers from Latin America which according to Towards Visibility is the second fastest growing non-EU migrant group in the UK.  Despite having education (often university degrees), they are working in exploitative, unregulated sectors and in precarious employment. According to the research, half of newly arrived Latin Americans work in contract cleaning, 45% experience labour exploitation and 1 in 5 are not paid for work done. They don’t speak English and have few opportunities to learn it, spending their time between their shift work and caring responsibilities. Day to day struggles, for them, are about survival. 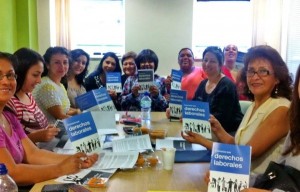 The women at LAWRS reading about their labour rights

At LAWRS we see cases like this on an ongoing basis. Some of them involving labour exploitation and others amounting to trafficking for labour exploitation. As our invisible women video portrays many women are placed in vulnerable situations and have few avenues for survival.

The industries where many low paid migrant women work are unregulated with employers able to exploit workers without much redress. Recent policy and legal changes have made things more complicated with the introduction of Employment Tribunal (ET) fees (that low paid migrant workers are completely unable to afford) and with the criminalisation of what the Government calls “illegal work”. In the past, employers were punished, but with an official Government “hostile policy on migration’ and the new Immigration Act 2016, workers with insecure migration status could face a prison sentence and the seizing of wages for working without appropriate documentation.

These new measures have opened new avenues for unscrupulous employers who are able to exploit migrant women workers with impunity.

We have seen cases of sexual abuse at work and other crimes that have gone unreported due to the absence of a “firewall” in between safe reporting and immigration control. Unfortunately immigration control continues to be well above survivor’s rights even in extreme cases of trafficking for sexual or labour exploitation.

Additionally for those workers that have the right to work in the UK, accessing justice is  burdensome and cumbersome. They struggle with language barriers, little knowledge about their rights and difficulties in navigating the system. There are also structural obstacles such as little regulation on outsourcing, prohibitive ET fees and the use of ACAS as a first port of call for workers (for most migrant workers in cleaning navigating the ACAS helpline is already a barrier for accessing justice).

What can be done about this? There is some hope in the extension of the remit of the Gangmasters and Labour Abuse Authority (GLAA) to all labour market sectors. However appropriate funding needs to be allocated to the GLAA (that will have increased powers with no additional funding) to be able to do their job properly. It is also essential to regulate outsourcing and for all contractors to have checks and balances in their cleaning and hospitality contracts. Labour exploitation could be present in your own building without you being aware of it.  ET fees also need to be abolished.

There is also a need for a strict firewall between immigration control and safe reporting of exploitation and crime. Information regarding migrant workers reporting exploitation should not be passed to the Home Office for immigration control purposes. Otherwise, survivors will continue choosing not to report. LAWRS will be launching a campaign called Step up! for Migrant Women to ensure strict firewalls for safe reporting and access to services for migrant women survivors of violence and crime.

It is also essential to document the extent and nature of the problem of unpaid wages and exploitation which is what Unpaid Britain is attempting to do.

For migrant women workers and the organisations supporting them, it is important to encourage unionisation and organising, and to provide proper advice in a language that the workers can understand. It is also essential to document the extent and nature of the problem of unpaid wages which is what Unpaid Britain is attempting to do. If we are serious about tackling non-payment and labour abuse, we need to ensure that migrant workers are not left behind and are able to assert their rights.